In contrast to cataract surgery which focuses on the front of the eye, vitrectomy is performed to reach the back of the eye in order to get access to the retina and repair its structures.

Some people see vitrectomy as a means of last resort, but the truth is that it is a very effective method of treatment, which is still too rarely used in Poland. Vitrectomy may be the primary method of treatment or the complementary one, depending on a specific case. It is often much more effective than other methods, for example, intraocular injections. 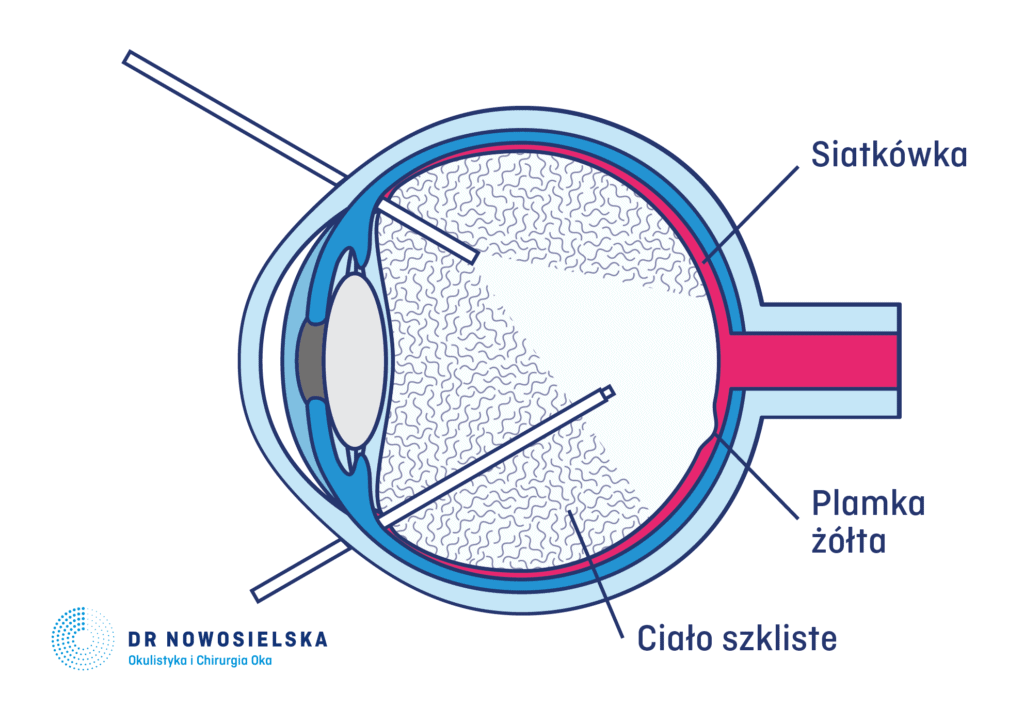 Vitrectomy remains the only available treatment for a number of diseases, including:

In those cases, vitrectomy should be performed as soon as the diagnosis is made.

Vitrectomy can be an alternative method of treatment, cheaper and more effective than injections, in the following cases:

Vitrectomy, which is considered to be the most difficult surgery in the field of ophthalmology, dominated the scientific interest of dr Agnieszka Nowosielska. Until now, she has performed nearly 2 500 surgeries of this kind, including very complicated clinical cases. Dr Agnieszka Nowosielska is a member of the European Vitreo-Retinal Society. She gained her experience in Moorfield Eye Hospital in Great Britain and in an ophthalmic centre in Bremen under the supervision of professor Klaus Lucke, the founder and president of the European Vitreo-Retinal Society.

The term vitrectomy derives from the Latin word ‘vitreus’, which means ‘vitreous body’. Vitreous body is a colourless fluid that fills the central cavity of the eye. In normal conditions, it must be transparent (invisible) and clear enough for the light to easily pass through it. Vitrectomy is a surgery that consists of removing the vitreous body from the middle of the eye. It is normally the first stage of the surgery, as the removal of the vitreous body is necessary to access the inner structures of the eye. During the vitrectomy, the epimacular membrane or any diabetes-induced changes may be removed from the eye or the retina may be unfolded. All these procedures are performed in order to restore the correct anatomical structure of the eye.

When is vitrectomy necessary?

Vitrectomy is a type of eye surgery undertaken to treat a variety of conditions, including retinal detachment, macular holes, epiretinal membrane, diabetic retinopathies, vitreous haemorrhage, macular oedema, macular haemorrhage in the course of wet Age-Related Macular Degeneration (AMD), as well as retinal vein occlusion and eye inflammation. It can also be performed in the case of postoperative complications after the surgical removal of cataract. Some of these conditions, for instance retinal detachment, require an early treatment within days of occurring, while others, such as epiretinal membrane, can be treated within several months, depending on the eye condition and visual acuity. In each particular case, the decision whether the surgery is necessary shall be taken on the basis of medical examination and individual patients’ needs.

How does vitrectomy work?

Vitrectomy is a surgical procedure that consists of removing the vitreous body that fills the central cavity of the eye. After removing the vitreous body, the access to the inner parts of the eye, such as the retina or the choroid, opens up. The procedure varies from one patient to another, as every eye is different and requires an adjusted treatment. Therefore, there is a number of procedures that can be performed during the surgery, including membrane removal, membrane staining or photocoagulation. In the course of the surgery, a special substance is frequently administrated into the eye in order to maintain the eye pressure at its normal levels, stop the bleeding or unfold the retina. Some of these substances, such as Decalin, are removed at the end of the procedure, whereas others, such as a gas bubble or silicone oil, remain inside the eye for several weeks until its full healing. The gas bubble is naturally absorbed. The silicone oil, on the other hand, must be removed at a later date in an additional surgery. Both gas bubble and silicone oil can temporarily affect the quality of vision – at first, patient may be unable to see as if his or her eye was completely healed. Unfortunately, in some cases there is no other way to hold the retina in place and cure the eye condition. Therefore, patients must arm themselves with patience and wait until the gas bubble is absorbed or the oil is removed so that they can fully recover.

For the vitrectomy to be successful, the type and the scope of the procedure must be chosen according to the needs of every individual patient. Success of the vitrectomy is also determined by the experience and the proficiency of the ophthalmologist.

The surgery usually lasts for two hours. Patient is dismissed and may return home after having rest for a few hours. In some cases, special head positioning is required in order to achieve the desired clinical effect. In such a situation, the medical staff provides the patient with a set of specific instructions to follow.

Is vitrectomy a means of last resort? Is it safe?

The vitrectomy technique was developed in the United States nearly 40 years ago. In Poland, it is performed by a small group of ophthalmologists; therefore, the majority of doctors who work in ophthalmic clinics in Poland have little experience using this method. As recently as 15 years ago, vitrectomy was performed only in very difficult cases or as a last resort. This was due to the fact that in the past the understanding of eye diseases as well as the technology itself were poorly developed. Even today, some ophthalmologists see the vitrectomy as a last resort and perform it once all other options have been exhausted.

Both the experience of the surgeons and the technological progress contributed to the improvement in the security of vitrectomy, its reproducibility and, most importantly, increased the possibility to achieve visual improvement. In view of the experience gained in the recent years, many conditions may be successfully treated by performing a vitrectomy. However, a frequent mistake is to perform it at the last possible moment. Patients should be referred to a specialist earlier that it happens now. When performed by an experienced surgeon, vitrectomy is not a means of last resort, but an effective method of treatment which cannot be replaced by eye-drops or tablets.

Does vitrectomy hurt? Is surgery painful?

Vitrectomy is performed under the neuroleptanalgesic anaesthesia – a local anaesthesia, also referred to as a sedation, in which sedatives and analgesics are administrated intravenously. After the surgery, the patient normally does not feel any pain, only tingling and scraping in the eye. Common pain killers help to relieve those symptoms.

Am I going to restore normal vision after vitrectomy?

The day after vitrectomy, the patient does not fully restore normal vision. By contrast, after cataract surgery, the patient often restores full visual acuity on the next day. It is due to the fact that vitrectomy is a much more complicated procedure and the patient subjected to this kind of surgery normally suffers from more complex health problems. What is more, after the vitrectomy, some substances are inserted into the eye in order to maintain the correct eye pressure and unfold the retina at the same time. They may temporarily influence the quality of vision; for example, if a gas bubble was administrated, patient may see a black round shape. The gas bubble is naturally absorbed within a few days or weeks and, consequently, vision improves. If silicone oil is administrated, vision is better comparing to when the gas bubble is used, but it is necessary to wait till the eye is completely healed and the oil is removed from the inside of the eye. Vitrectomy is a surgery of retina. Depending on the disease from which the patient suffers, retina may heal for about a few or several months. That is why, visual acuity may improve long time after the gas bubble is absorbed or the silicone oil removed.

What are the vitrectomy-related complications?

Postoperative complications can be divided into two groups: the minor ones and the severe ones. Minor, medically insignificant complications include conjunctival haemorrhage, burning eyes, stinging, and tearing. These complications are caused by the surgery itself and subside after a few days. High intraocular pressure may be experienced sometimes. If so, additional eye-drops must be used. Among severe complications there are eye haemorrhage, secondary cataract (if the lens had not been removed before), and retinal detachment. However, they are not frequently observed and may be treated in order to restore vision. It is worth bearing in mind that the sooner the surgery is performed (the less advanced the disease is), the better its result and the slighter the risk of complications will be.

Are there any contraindications for vitrectomy?

Generally, there are no contraindications for performing vitrectomy. If the general condition of the patient allows for the carrying out of a surgery under local anaesthesia, the vitrectomy can be performed. Some patients ask for performing the surgery under general anaesthesia for psychological reasons. It is possible, but it should be noted that this kind of anaesthesia is much more burdensome for a patient’s body.